“The strong should protect the weak” 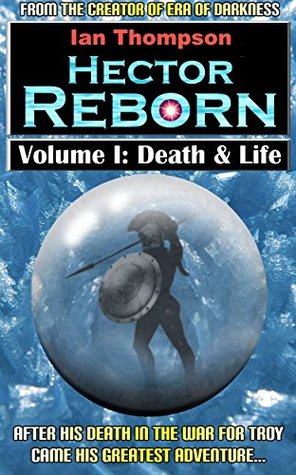 Prince Hector, the greatest defending warrior in the epic Trojan War, is brutally slain by his nemesis Achilles… And finds himself reborn in an astounding new realm.

Traumatized by separation from his family, nation and world, Hector finds it hard to accept the prospect of a new life. His rigid codes of honor and loyalty make him feel as if he has abandoned his war-ravaged home. The beautiful Elsha of the Nemalite people, introduces him to an Elysium of kindness, harmony and magic, where living gods can walk among mortals. The Trojan Prince is enraptured by his new friend and the apparent miracles around him, and at first believes this world is perfect. He gradually learns of a grotesque force which holds the Nemalites under a thrall of fear and hopelessness. Hector cannot stand by and watch the horrors around him – he acts to save his new friends…

But the result of his efforts is not peace, rather the unleashing of a menace that plunges Elysium into hellish turmoil. Guilty of the murder of innocents and hated by his companions, Hector fights to curtail the disaster he has caused. Against him stands an army of Shaltine – supernatural warriors which exude an aura of Fear, rendering all opponents helpless. Countless lives, both on Elysium and back on Hector’s home world, are threatened by a fate far worse than death. And amid all the chaos, desperation and destruction, there awaits a malevolent revelation for Hector…

Something so awful it may destroy Hector’s sanity before it takes his life.

I have to admit what first interested me about this book was the use of Hector as a main character, I love the movie Troy and this seemed like a good ‘follow on’ if you will. This novel is definitely unique as it incorporates history and fantasy into one whirlwind of a story. We are immediately transported into the world of Hector, the Prince warrior who is determinedly trying to protect his homeland before his death at the hand of Achilles. The new world he is transported into was a little hard to get a grip on at first as everything was fleshed out but I was soon able to gain a grasp of what was going on.

Hector as a character is hard not to like, he has a distinct set of values and is loyal to a fault. Although granted this does get him into trouble later in the book and he is not immune to making mistakes it was good to read. Without giving away too many spoilers the other characters were definitely full of surprises and the author has no qualms about character deaths. Personally I do enjoy this in a novel as it creates genuine fear for the characters and their fates. If you do enjoy fantasy mixed with some historical fiction then I would recommend this for you.

I was given a free copy of this book in exchange for an honest review, if you would like to visit their website you can find that here.