“As a sign of her important domestic status, the Viking wife carried the household keys on a chain, which was attached to her tunic. Some argue that the phallic shape symbolised the woman’s control of her husband’s manhood.”

Two sisters. One secret… A lie that could destroy them both. 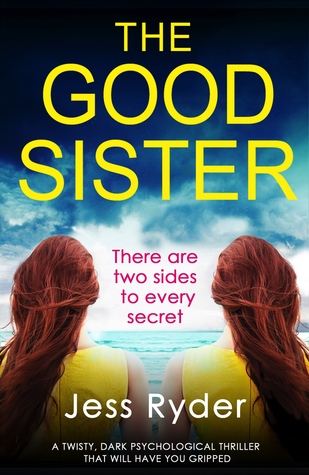 When her father dies, Josie is devastated to uncover he led a secret life: another house, another family and a half-sister called Valentina.

Both with red hair and icy blue eyes, Josie and Valentina could be mistaken for twins. But the similarities end there…

A nail-bitingly tense and unputdownable read that will keep you turning pages into the night. Perfect for fans of Gone Girl, The Girl on the Train and Sister Sister.

Before I started this book I hadn’t really read any psychological thrillers for awhile my reading list had definitely incorporated a lot more happy kinda romance reads lately so I wasn’t sure how quickly I would be able to get into this book.

The plot starts relatively quickly we are introduced to the girls father and while this introduction doesn’t really give anything away it does bring to the forefront a couple of issues or mysteries I guess that aren’t hinted at in the blurb. While the story doesn’t always keep up this fast paced narrative it does just enough to keep you interested throughout with a few twists and turns that I didn’t see coming (though potentially if I had been looking out for them more I would of). The book really explodes at the end making for a satisfying if not a tad disturbing climax.

The POV of the books switch between our two main characters Josie and Valentina, I did find it a tad irritating initially that it never specified which sister’s views you were seeing things from however I don’t think the book could probably of been written without this. They both seem to be given the roles of both the ‘good’ and ‘bad’ sister rather quickly and this more or less set the tone for future events. Out of the two I did prefer Josie for most of the book but dam does she make some stupid decisions, at points it was hard to follow her reasoning before her actions which just made her that little bit less relatable. Valentina while I didn’t agree with her actions either I could kinda see more as to why she was doing things. The main thing I loved about this book and what kind of set it apart in terms of uniqueness was the Viking fact at the start of each chapter. Not only were these interesting but they did in part relate to what was coming next and I found I was left wanting to know more. I will admit after reading this I did go straight back to another fluffy romance so it didn’t quite recapture my love of this genre but it’s still one worth checking out.

One thought on “The Good Sister – Jess Ryder”