When it comes to men, Marissa Jones is totally committed to not being committed. One major heartbreak is enough for her.

Against her better judgment, Marissa agrees to a pact with her friends to marry the next 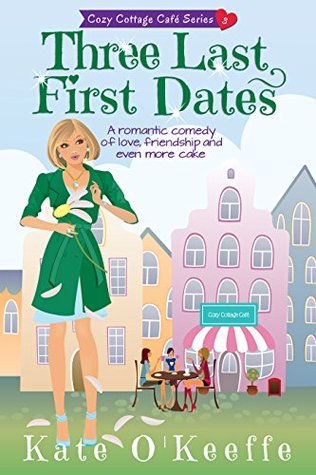 guy she dates. But she isn’t going to take any chances. For her, it’s a numbers game, and one last first date just isn’t enough. So, she ups the ante–three first dates with three very different guys, all in one day.

But can any of these men live up to her high standards?

Despite a few bumps in the road, from the three, she chooses The One. That is until the motorcycle-riding ex she never got over turns up, changing everything.

In the end, do you choose love or does love choose you?

Three Last First Dates is the third book in the Cozy Cottage Café series, but can be read as a standalone. It features laughter, a total hottie you will fall for, and, of course, a lot of cake! As with all my stories, I guarantee a feel-good, happy ending!

I was rather excited to go into this book with it being set in New Zealand at all, but within the first few pages I was already struggling. I loved the premise of the book and kind of expected the dates to be a lot bigger deal than they were, instead they seemed to be a mild inconvenience achieved throughout the course of one day. Which ultimately left a whole lot of book left. After that there just seemed to be a lot of discussion regarding the dates and what on earth to do next.

Now the writing itself was good and I found out afterwards it is actually the third book in a series, however it supposedly could be read as a standalone. I’m starting to think I have problems if I read any book in a series out of order as I haven’t particularly liked any that I have read recently. I’m not sure if I would of liked this book if I had enjoyed the first two in the series but as I hadn’t I found myself not really invested in any of the characters. The main problem I had with the book though was with Marissa. I could not get behind her as a character to the point she was seriously irritating me. Not the book for me but I still love the idea behind it.

Would I read another book from this author: No