Hi everyone and welcome today to a special guest post from author Stephen Ainley to talk about his book Dennis Bisskit and The Man From Paris With the Very Large Head!!  Don’t you just love that title!

Hi, from sunny Western Australia. This book is a sequel to, The Dennis Bisskit Adventures, and I am just finishing a third and possibly last in the series (but who knows.) Funnily enough, although I have lived in Australia for 40 years, just about everything I write seems to be set in England, in the ‘50s, ’60s and ‘70s. My first novel, the Dennis Bisskit Adventures was released in the U.K. in 2017 and told the story of a young lad growing up in Dudley (west midlands) My main aim in writing is primarily to make people laugh. In the first book, this is achieved through a series of adventures that happen to Dennis between the ages of ten to twenty years old. School-life, holidays, the Scouts, first jobs at a department store and then a hotel and ending with Dennis and best mate, Stinky joining the army in the ‘60s.

Dennis Bisskit and the Man From Paris with the Very Large Head was published recently. It follows on from the first book and tells how the boys leave the army and become Dudley’s finest (and only) Private Investigators, in the late 1960s. This book is still mainly humourous but also develops into an exciting crime story. It always helps if you have read the first in a series, but it’s not essential in this case.

My Website/Blog is all things Dennis, plus other silliness. 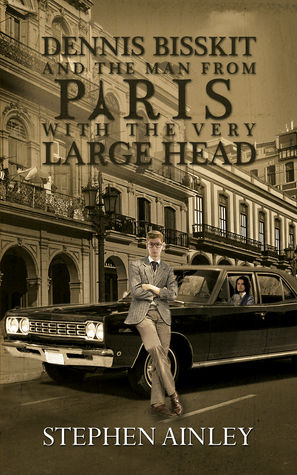 1969 – Man is about to set foot upon the moon. Meanwhile, momentous events are also taking place in the West Midlands. Weddings, funerals, hereditary hair loss, M. J. K. Smith’s cricket bat, a missing masterpiece; dastardly deeds are taking place, above and below the streets of Birmingham. The police are baffled. This looks like a job for Dudley’s finest, Bisskit and Blackshaw – private investigators. Yes, the boys are back. Older, but none the wiser in Dennis Bisskit and the Man from Paris with the Very Large Head.

Stephen was born at a very young age, in Birmingham, U.K. As a youth his hobbies were; knocking on people’s front doors and running away, tying girls’ shoelaces together while they weren’t looking, and playing conkers. Strangely enough, they remain his hobbies till this day. Stephen served in the British Airborne in the ‘70s and has the aches and pains to prove it. He moved to Australia in the late ‘70s in search of sunshine and is now sick of the sight of it.

Sometimes people ask me what the most challenging thing about writing humor is.

What’s funny? Everyone has a different opinion. You just have to write what you find funny and hope for the best. I test my stories out on two age groups, my wife and my Rockstar grandson. If they both laugh, that’s good enough for me. I think Australia, New Zealand and the U.K. have a similar sense of humour but wasn’t sure what the rest of the world would make of Dennis, so was delighted to get this review, from Canadian, Book blogger, Leanard Tillerman.

There can be little doubt that we live in an age of rapid technological advancements. The world seems smaller and more connected than ever before. In such an environment, there is an ongoing battle to gain the often fleeting interest of the people within this society. This can be a difficult task in a world which is frequently characterized by the need for instant gratification. Television, video games, social media and the Internet have become constant staples and sources of entertainment in this culture. Not that there is anything particularly wrong with that mind you. As the saying goes…”it is what it is.”

However, when something comes along that transports us back into an age which is characterized by different priorities and needs, it is like a breath of fresh air. That is exactly what Stephen Ainley does in his novel, The Dennis Bisskit Adventures. If you love a wholesome and heartwarming story which is saturated with humor, then this novel needs to be put on your “To Be Read” list “tout suite!” The novel follows the life and escapades of the loveable, albeit very accident prone Dennis Bisskit. Born just after the Second World War ended, we are able to see young Dennis grow up in the 1950’s and 60’s and transform from an innocent and bungling boy, to a young man in his own right. In order to show this progression, the author puts together a series of Dennis’s significant life events, from the painful awkwardness of early school life to joining the Staffordshire Regiment and fighting in Uganda. In between the reader is treated to a number of hilarious adventures. From Dennis trying to set a new world record for running the mile (my personal favorite), to the tribulations at his first real job in a department store. The very humorous escapades clearly reveal a young boy’s unique and poignant journey into manhood. Did I mention that this book is thoroughly funny? The various scenarios which Dennis finds himself in are truly gut splitting. However, it is not just the actual incidents which are comical. Indeed, it is a mixture of the well laid out story scenes, perfectly described setting and solid character development by the author which makes it all work. If Dennis was not such a likable, optimistic and good natured character, the humor would fall flat as a pancake.

As readers we find ourselves constantly laughing with Dennis, not actually at him. The ability to pull this off is no easy feat and the author manages it masterfully. In regards to character development, there are a number of very interesting and well developed characters in the novel. Aside from Dennis, the supporting characters such as his family, Stinky, Mrs. Ricketts and Sergeant Plunkett are developed with intricate care. They are all colorful, comical and entertaining in their own right. The reader cannot help but engage with and relate to the characters in the book. Also, they all solidly support the overall theme which is “the coming of age.” This serious theme is frequently presented in the story in a unique and comical manner. The setting for this story takes place in a different era, over 70 years ago. Life was much different then. Having recently seen the end of World War 2, it was a society focused upon simply living and rebuilding lives. Modern day technology and luxuries were not part of this world. However, that is not to say that things were unpleasant or tedious. They were just different. Many people would say it was a more wholesome time consisting of far less distraction. Stephen Ainley aptly captures such an atmosphere in his novel. It is like we virtually travel back in time to a different age and experience these adventures with Dennis. For those of us in the mature stage of our lives, such as myself, it is a very welcome trip and is fondly embraced.

Overall I would recommend this book for almost any age from Teen and up. There is something in it for everyone. Nevertheless, I would also say it holds something quite special for those readers who are a bit older. If you are looking for a story which is extremely well written, then The Dennis Bisskit Adventures is a perfect choice. It is hilarious, poignant, and at times, a bit sad. The writing has a beautiful flow to it and ties everything together in an exceptional and descriptive manner.

Having read Stephen Ainsley’s debut novel ‘Dennis Bisskit’ I was very much looking forward to his second novel, Dennis Bisskit and the Man from Paris with the Very Large Head.’ The amusing title, although long, gives insight into the amusing rhetoric within this book. The characters of Dennis and Stinky are so loveable; I was rooting for their success throughout the story. Without giving away any spoilers, I can say ‘The boys are back in Dudley.’ This hilarious story is a real page turner, full of amusing incidents that made me chuckle until the very end. I look forward to reading more tales of Dennis Bisskit in the future.