To achieve her heart’s desire, a novice actress may very well have to sell her soul. 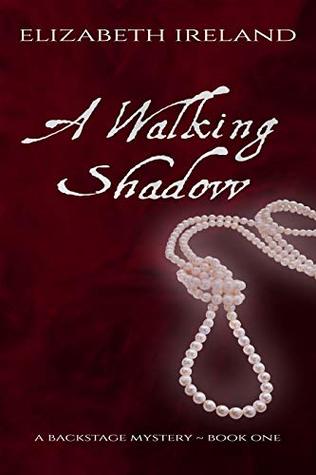 In 1871, Lillian Nolan accepts a small role in Macbeth, and finally fulfills her dream of becoming an actress. That is until the renowned, but venomous, female star of the production is murdered onstage opening night. When her enraged spirit haunts the theater, Lillian is shocked to discover she can communicate with her. Offered a Faustian bargain in which she will be given talent and expertise way beyond her ability in exchange for uncovering the killer, Lillian can’t resist.

Her quest for the truth causes her to descend into the Underworld, the den of inequity below the streets of Chicago. What Lillian finds soon embroils her in a battle between her passion for performing and sovereignty over her own body as it all plays out in a supernatural game of good and evil

.A Walking Shadow is the first standalone book in the Backstage Mystery series. If you enjoy stories with a touch of the paranormal that blend historical fact with fiction, then you’ll love Elizabeth Ireland’s tale of history, mystery and theater.

Now this is a different sort of book then I usually go for but I’m sure glad I got the opportunity to read this! Written as a memoir we follow Lillian and her love for the theater before it takes a supernatural/murder mystery sort of twist. This did take me a bit to get into but this may of been due to this not being my typical sort of book. I enjoyed the writing and the pacing of the book though for some reason I couldn’t connect with Lillian as much as I wanted to. This didn’t however diminish my enjoyment for the book at all and I’m already excited to read the next!

Life upon the wicked stage can be deadly.

The series chronicles her adventures in which she continually becomes enmeshed in solving mysteries which often require her accessing the realm of the paranormal. Filled with an incredible cast of characters—factual, fictional, and sometimes non-physical—who either help or hinder her quest for the truth, the stories take place during a a period considered to be the golden age of both acting and spiritualism in America.