To prove her friend’s innocence, she’s willing to face death.

By 1875, Lillian Nolan believes she has successfully shut off any connection to the spirit 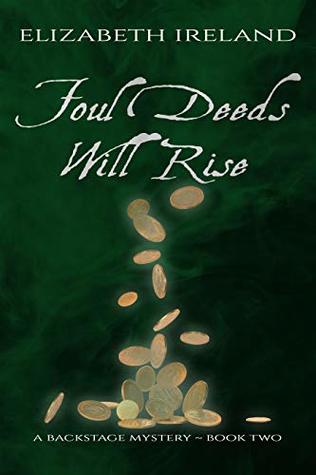 world. That winter she is thrilled when she wins the role of Ophelia in a new production of Hamlet in her home town of Chicago. Everything changes when the body of the managing director is found sprawled across the steps of the dress circle and all the investors’ money is missing. Lillian fears, once again, her career is over before it begins.

After her dearest friend is arrested for murder, Lillian commits herself to discovering the truth. Her search is complicated by a strange man who is following her, the romantic overtures of her co-star, and a reunion with an old nemesis. But nothing is what it seems. What she does find puts a member of her own family at risk and leads to the unmasking of the killer with lethal consequences for herself.

Foul Deeds Will Rise is the second standalone book in the Backstage Mystery Series. If you enjoy historical mysteries that blend fact and fiction and include a touch of the paranormal, then you’ll love Elizabeth Ireland’s story of the adventures of one young actress during the golden age of acting and spiritualism in America.

Tagline: Life upon the wicked stage can be deadly.

The series chronicles her adventures in which she continually becomes enmeshed in solving mysteries which often require her accessing the realm of the paranormal. Filled with an incredible cast of characters—factual, fictional, and sometimes non-physical—who either help or hinder her quest for the truth, the stories take place during a a period considered to be the golden age of both acting and spiritualism in America.

Now this is the second book in the Backstage Mystery series and I have to say it is definitely just as intriguing as the first! Now this I think could be read as a standalone but I think it would be best to read the first in series beforehand. Once again written as a memoir we follow Lillian as she is immediately confronted with another death and the mystery that surrounds this. I think I enjoyed this book a little more than the first possibly because I had already got to know Lillian but also I think she develops more as a character within this book than the first. I also think I knew what to expect and went in super excited to see how it Lillian stories continued! Once again I really enjoyed the theater aspect of the book as well as the mystery and once again it was really refreshing to read something a little out of my comfort zone especially when it was so enjoyable!

One thought on “Book Review: Foul Deeds Will Rise by Elizabeth Ireland @rararesources”