“It used to make me feel special, the fact that they knew me, knew what I wanted, but it had 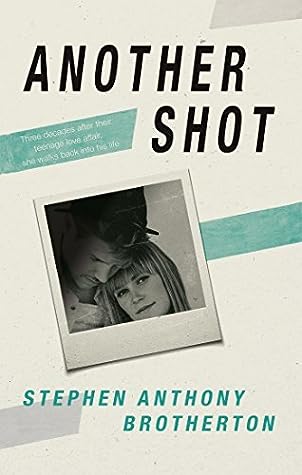 soured with repetition. I’d become my drink order – that’s what it felt like. But it was okay. People watching in this place made me feel part of the world, got me away from the house for a few hours. And it was here she came back to me. I hadn’t seen her for three decades and suddenly there she was, standing next to my table.
‘Hello, Freddie’.”

Another Shot tells the story of Freddie and Jo-Jo, who are reunited in a coffee shop thirty-five years after the end of their teenage romance. Jo-Jo finds Freddie through a mutual friend, and tells him that she is emigrating following the death of her husband. She gives him a photograph of the two of them on their first weekend away, a trip to Blackpool.
How they originally met, why they parted, what happens in their lives apart is all told through a series of flashbacks. These memories feed into events when they meet up again and explain why, despite the passage of time and the intensity of their still simmering love, there is no future for their relationship.
Author Stephen Brotherton lives in Telford and is a Social Worker.

Now, this is a different sort of love story than I normally read, but that doesn’t mean I enjoyed in any less! Another Shot explores the relationship between Jo-Jo and Fred as you are taken back to when they first met as well as getting to know the people they are today. I was really intrigued as to how this would all fit into one coherent story but the author manages to write it in such a way that I felt like I could really understand how both Fred and Jo-Jo were feeling/thinking within both of the different time periods. This isn’t so much a happily ever after sort of story but one that makes you really think about the sort of relationships we experience through life, as well as how one really fits into other’s lives. It’s definitely a story with a more somber feeling to it but I enjoyed getting to know the characters and their experiences.

‘I was born in Walsall, grew up in the West Midlands and now live in Telford with my two

cats, Boris and Tai. After working in the health and social care sector for over thirty years, I have now taken early retirement to write the trilogy that has been rooted in my head for most of my life.

Another Shot is the first book in the Shots trilogy, which is based on a first love relationship I had as a teenager. It tells the story of Freddie and Jo-Jo, who are reunited in a coffee shop three decades after the end of their teenage romance. How they originally met, why they parted, what happens in their lives apart, and what happens when they reunite is all told through a series of first person vignettes. The second book, An Extra Shot, will be published in July 2019. I am currently working on the final instalment.

Getting these stories down on paper has been a cathartic process. I hope you enjoy them. ‘

One thought on “Book Review: Another Shot by Stephen Anthony Brotherton @rararesources”